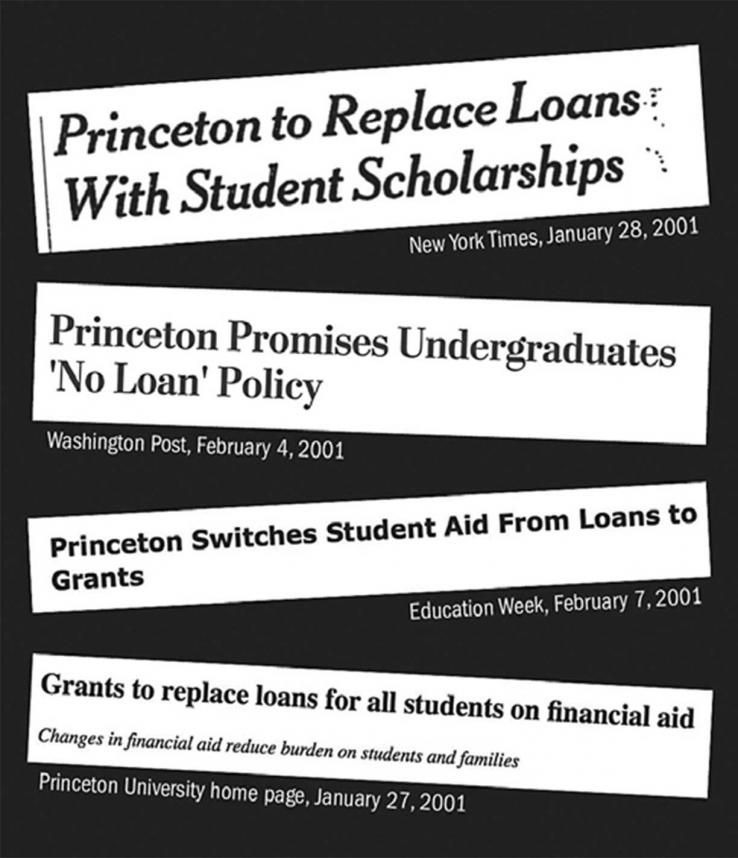 Twenty years ago this month, on January 27, 2001, Princeton made history. Spurred by the vision of President Harold Shapiro *64 and propelled by support from generations of loyal alumni, Princeton replaced loans with grants, enabling its students to graduate debt-free and opening its gates to talented young people who would previously have found the University unaffordable.

It was, however, the bold undergraduate aid policy that captured national attention. The Times quoted Arthur Levine, then president of Columbia Teachers College, who declared, “Every Ivy League university is going to have to try to match this if they want to compete for the best of the middleclass students.”

That was part of President Shapiro’s plan. “Our hope,” he told the Princeton Alumni Weekly on the 10th anniversary of the no-loan program, “was that [peers] would follow us, not that we would have a competitive advantage.”

And follow they did. “No loan” has become a defining benchmark for financial aid programs in American education. At least 20 colleges and universities now meet 100 percent of need for admitted undergraduates without requiring them to incur debt. A much larger number are “no loan” for students below certain income thresholds.

Princeton’s 2001 announcement had an impact across higher education. It also changed our own University. Affordability and access have become signature commitments for Princeton, and we have attracted spectacular students who would not otherwise have studied or flourished here.

The numbers are stunning. In 2001, about 41 percent of Princeton undergraduates were on financial aid. For last year’s incoming class, that number was 62 percent. The average annual grant was over $56,000, which exceeds Princeton’s tuition price (the average is higher than tuition because some grants also cover all or part of room and board). The aid policy assists low-income families, middle-income families, and upper middle-income families: for example, last year 100 percent of aid-applicant families making $180,000 or less qualified for financial aid.

As a result, 83 percent of Princeton students graduate debt free. Nobody is required to take out a loan, but some do so on a discretionary basis. For those who choose to borrow, the average debt at graduation is around $9,400. That’s one of the lowest such averages in the country, even if you look only at the students with debt and ignore completely the 83 percent who graduate with zero debt.

From the outset, President Shapiro and the Princeton trustees extended this remarkable financial aid program to international students. That choice was unprecedented in 2001 and remains rare today: only five colleges and universities have followed Princeton’s lead. Many colleges rely on the tuition dollars provided by international students; Princeton’s policy allows us to focus on the talent and creativity brought to campus. We benefit, and our country benefits, from our ability to attract the best students in the world.

Princeton continues to push the envelope. As we seek ways to ensure that all of our students have the financial support they need to flourish on this campus, Provost Deborah Prentice and I are fortunate to have had the counsel of Princeton’s legendary Director of Financial Aid, Robin Moscato. Robin, who will retire at the conclusion of this academic year, joined the financial aid office in 1983 and became its director in 2006.

In my experience, Robin can answer almost any question about financial aid at Princeton. Provost Prentice and I have regularly relied on her to tell us whether Princeton is being true to the goals that Harold Shapiro and the trustees identified in 2001, and what steps she might recommend to support our students better.

For example, in 2019 Princeton announced that it would restructure aid packages by consolidating summer earnings and campus job expectations into a single, smaller contribution amount. As Provost Prentice said at the time, the change will provide students with “more flexibility to pursue academic, internship, and service opportunities between and during academic years.”

Our financial aid budget will grow again when our new residential colleges open in fall 2022, allowing us to admit 125 additional students per year. We are committed to meeting the full financial need of every student in the expanded class. Raising funds for that purpose is a major goal of the University’s capital campaign.

I am profoundly conscious that Princeton’s alumni and friends were the driving force behind the 2001 decision to go “no-loan” and the tremendous good that has followed from that change. By paying it forward to new generations of students, you have improved their lives, enhanced our University, and raised the aspirations of institutions throughout our country. I am deeply grateful for what you have done for Princeton and for our students.