Published in the March 19, 2014, issue of the Princeton Alumni Weekly

Each year on the afternoon of Commencement, when most students have collected their degrees and left campus, a few graduating seniors enter Nassau Hall’s Faculty Room for a profoundly moving ritual. The event is Princeton’s ROTC commissioning ceremony, and the students whom it honors exemplify the University’s ideals of engagement and service with singular distinction.

On a Friday afternoon in January, with the commissioning ceremony months away, I met with 17 members of Princeton’s Army ROTC program over lunch. The meal was a break in a typically demanding day for the Tiger Battalion students, some of whom started with a 6:30 a.m. physical training session before resuming their final-exam preparations. 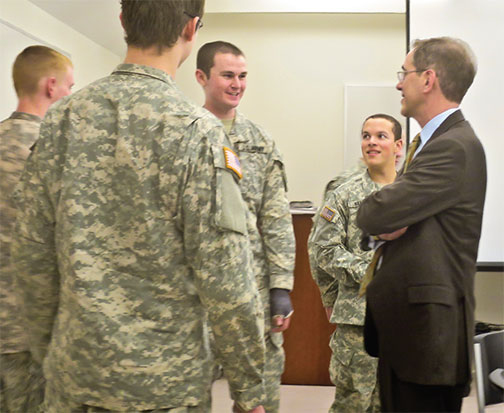 Though I am accustomed to seeing Princeton students juggle a dazzling variety of responsibilities and commitments, I was immensely impressed when the cadets described the array of activities they pursue on top of their rigorous University course loads and their ROTC duties.

Among my lunch companions were students who are concentrating — or planning to concentrate — in 10 departments across the disciplines, from classics to computer science to chemistry. Reflecting the Army’s increasing emphasis on foreign-language skills, they are studying Arabic, Persian, Chinese, Spanish, and French, and many have studied abroad or plan to do so. Program Director Lt. Col. Peter Knight noted that the Army also is encouraging more cadets to study science, technology, engineering, and mathematics.

In addition to their Princeton academic responsibilities, the cadets participate in Army field training exercises, leadership laboratories, military science courses, and physical training. They also enroll in intensive military training programs during the summer across the United States and abroad.

Still, they manage to find time for many other endeavors. The group I met with included varsity and sprint football players; members of the rugby, soccer, and sailing clubs; residential college advisers; members of campus religious organizations; debate and mock trial participants; a volunteer emergency medical technician; and even a stand-up comedian! Last year’s senior class president, Zach Beecher ’13, was a Tiger Battalion cadet.

Also, during a period of campus attention to opportunities for women’s leadership, the Army ROTC has produced some of Princeton’s most striking success stories. Hannah Martins ’13 was last year’s Tiger Battalion commander and recently graduated at the top of her Basic Officer Leadership Course at the U.S. Army Military Police School. Kelly Ivins-O’Keefe ’14 is the current Tiger Battalion operations officer, overseeing the battalion staff, and was Princeton’s top performer last summer in the grueling ROTC Leader Development and Assessment Course.

I am proud that Princeton has supported our longstanding Army and Air Force ROTC programs, and that we have reached an agreement to revive the Princeton Navy ROTC program next fall. ROTC programs are vital contributors to the University’s efforts to develop citizens and leaders “in the nation’s service and in the service of all nations,” as evidenced by their dedicated students and distinguished alumni. ROTC students demonstrate an extraordinary commitment to education, and they expose their fellow Princetonians to perspectives they might not otherwise readily encounter.

During our lunch, Joshua Lyman ’15 related that another Princeton student, unsure about her employment prospects, said that she envied Joshua because, with an officer’s commission awaiting him at graduation, he need not have any anxiety about his future. But while Joshua and his fellow cadets look forward to serving their country, entering the military for a nation that has been at war for more than a decade certainly is not an anxiety-free proposition.

Nelson Collet ’16 noted that it is common for many young men and women in his native Kansas to enlist in the armed forces, a background that many Princeton students might not share. Nelson, whose childhood memories of the Sept. 11 terrorist attacks influenced his decision to pursue military service, feels that some Princeton students are very disconnected with the fact that America remains a nation at war.

He is undoubtedly right. In decades past, the draft made America’s wars personal to every college student. I marched to protest the resumption of compulsory registration during my own days as a Princeton undergraduate. But conscription is no longer a lively issue on Princeton’s campus, or any campus. Students today are more likely to admire military service than were their predecessors, but far less likely to think of it as a part of their own lives.

When I consider Tiger Battalion’s role on our campus, my thoughts return to our commissioning ceremony, which occurs against the backdrop of Charles Willson Peale’s portrait of George Washington after the Battle of Princeton. Washington was a military hero who reinforced the authority of civilian government when he relinquished command of the Army after the Revolutionary War. Princeton’s cadets, with their combination of liberal learning and military training, inherit the tradition of constitutional leadership that Washington bequeathed to us. They bridge higher education and military service at a time when the nation very much needs their special mixture of character, dedication, and intellect.