“The Spirit of Truth-Seeking”

Published in the December 4, 2019 issue of the Princeton Alumni Weekly. 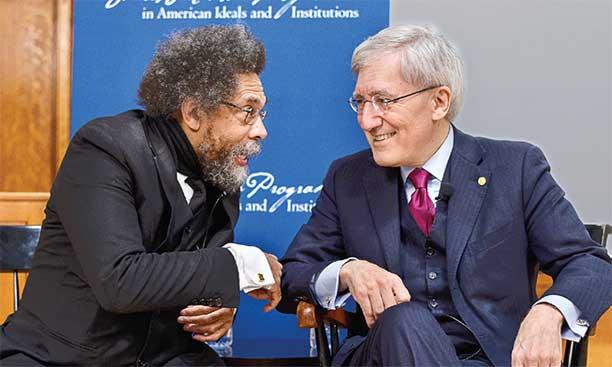 On Friday evening during First-year Families Weekend, I introduced an event about “The Spirit of Truth-Seeking,” featuring Professors Robert P. George and Cornel West. This topic is core to this University’s mission and to the mission of all great research universities. I was delighted to offer some thoughts about truth-seeking to the audience that night, and I am similarly glad to share my comments with readers of the Princeton Alumni Weekly. Here is an excerpt from what I said. — C.L.E.

Tonight’s discussion addresses a topic, truthseeking, that resides at the heart of this University and, indeed, at the center of any research university worthy of the name. We have many kinds of schools in this country, with many kinds of goals. Schools may aim at skill-building, value formation, vocational training, or the transmission of expertise. None of these goals are absent from a research university’s mission, but neither are they the core of it. Research universities have a more radical, disruptive, thrilling, and demanding mission: they seek truth about questions that matter even when, perhaps especially when, investigating them may threaten conventional wisdom or societal pieties.

One of the reasons why students sometimes find the transition from high school to university to be difficult—and, since this is families’ weekend, I want to stress that it’s okay to find the transition difficult; I certainly found it difficult!— is that too often high schools reward only the regurgitation of conventional wisdom, whereas a great research university demands that its students simultaneously understand conventional wisdom deeply and think critically about it.

Earlier this week, Professor James Peebles *62, who has been at Princeton continuously as a student and faculty member for more than 60 years, received the 2019 Nobel Prize in Physics. He won the prize for his cosmological theory about the origins, evolution, and structure of the universe. At his press conference on Tuesday, Professor Peebles said that he hoped for many years that his theory was wrong! He kept formulating alternative theories that might deepen our understanding of the cosmos by disproving the theory that eventually won him the Nobel Prize. Professor Peebles also said that he loved teaching Princeton students because their thoughtful, probing questions forced him to improve his own understanding of the physics that he was teaching.

Professor Peebles’s comments about teaching and research exemplify the truth-seeking spirit of this University. So, too, does a sign-on statement that Professors George and West published a year-and-a-half ago, titled, “Truth-Seeking, Democracy, and Freedom of Thought and Expression.” Their statement begins with the following paragraph, which I heartily endorse:

The pursuit of knowledge and the maintenance of a free and democratic society require the cultivation and practice of the virtues of intellectual humility, openness of mind, and, above all, love of truth. These virtues will manifest themselves and be strengthened by one’s willingness to listen attentively and respectfully to intelligent people who challenge one’s beliefs and who represent causes one disagrees with and points of view one does not share.

You can find the statement online, and decide for yourself whether you wish to sign it. Thousands of people have done so. I should tell you, though, that I am not one of them. I am skeptical in general about mass petitions, which for my tastes involve too much conformity and peer pressure for a truthseeking environment that should encourage independence of mind. I accordingly try to avoid signing petitions unless I genuinely agree with every word of them—and, in this case, I do not. But I am sure that is okay with Professors George and West because they genuinely love disagreement and exemplify the truth-seeking spirit they recommend.

Their conversation tonight will, I expect, provide further evidence of those values. Professors George and West have been two of Princeton’s most prominent and widely known public intellectuals. Conventional wisdom, which, you may have noticed, I am urging you to question, labels Professor George a “conservative” and Professor West a “democratic socialist.” Some people, I can tell you, have been shocked to learn that Professors West and George co-teach a seminar together. Their surprise is misplaced: Professor George and Professor West are united by a commitment to a shared set of questions, not a shared set of answers, and in a truthseeking university the commitment to questions is by far the more important one.

[At this point, I went on to provide brief biographies of the evening’s speakers; space limitations preclude me from printing my full remarks here.]