Scholarship and Service — from Wilson to Turing to Davos

Published in the March 4, 2015, issue of the Princeton Alumni Weekly

In late January, I traveled to Davos, Switzerland, to attend the World Economic Forum, becoming the first Princeton president to join in the grand annual gathering of some 2,500 heads of state, business executives, scholars, philanthropists, and artists. 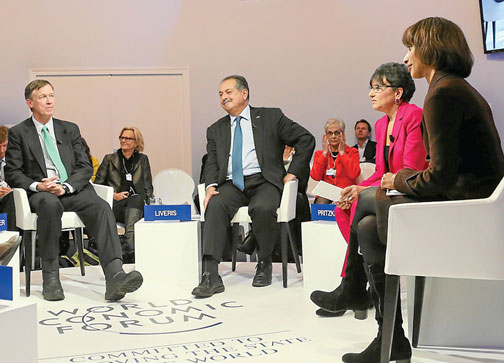 The forum is designed for influential leaders, thinkers, and practitioners to address global challenges ranging from inequality to climate change to the future of technology. It was a striking experience — not only in terms of the breadth of topics being discussed, but because of the setting. The village is a stunning, postcard-perfect version of the Swiss Alps. Attending Davos felt a bit like being at the Winter Olympics given the scenery, security, media saturation, celebrities, and air of excitement.

A Princeton colleague suggested that Davos in some ways resembled Reunions. The entire town gets made over and people descend on it from around the world for seminars and social events — although the proportions are reversed in Davos, and both the dress and the tone are more muted (lots of dark suits, and not a Tiger-striped bowling shirt to be found!). The forum also reminded me of what happens on a college campus, with time and opportunity available for serendipitous interactions with many interesting people.

Thinking about such connections between Davos and Princeton, I am drawn back (as I am often) to Woodrow Wilson 1879 and his seminal speech, “Princeton in the Nation’s Service.” Wilson declared that if Princeton “is to do its right service, that the air of affairs should be admitted to all its classrooms.” Today, if Princeton is to be faithful to Wilson’s call, then we must be in places like Davos taking part in important conversations about the state of our global society.

At Davos, I participated in the Global University Leaders Forum, at which university leaders from around the world discussed the future of higher education. Princeton faculty members were also on hand. Cecilia Rouse, dean of the Woodrow Wilson School of Public and International Affairs, joined U.S. Secretary of Commerce Penny Pritzker and other panelists in discussing America’s economy, infrastructure, and employment growth. Dean Rouse also spoke on a panel about reshaping education worldwide. Atif Mian, Princeton’s Theodore A. Wells ’29 Professor of Economics and Public Affairs, held an open conversation with New York Times columnist Thomas Friedman about how rising household debt triggered a global financial crisis. In addition, Professor Mian sat on a panel about trends that are shaping future global risks.

By engaging in these sorts of activities, we honor Wilson’s vision by becoming more attuned to the pressing issues facing society and, critically, by finding ways to connect those issues to our core research and teaching. Yet, in his famed speech, Wilson made clear that Princeton’s most important contributions to society’s well-being depend on its continued pursuit of fundamental truths and basic research. He noted the “brisk” spirit of scientific discovery at universities and stressed the vitality of scholarship in the humanities as a correction to the hubris that often accompanied technological advances.

So while we must remain conscious of the need for Princeton to relate to current affairs, we must remember that our most enduring service to society comes through inquiry into questions that are more profound than the exigencies of the moment. And during my week at Davos, I was reminded of this by, of all things, the entertainment headlines of the day.

As I attended the global forum, Andrew Hodges’ terrific biography of computer science pioneer Alan Turing *38 was climbing The New York Times best-seller list — heady territory for a Princeton University Press book, especially one that was first published in 1983! The renewed interest in Alan Turing: The Enigma was sparked by the success of The Imitation Game, a critically acclaimed film that had just received several Oscar nominations and was based on Hodges’ book.

Turing was a mathematical genius whose work had immeasurable impact on the world. His explorations of questions of mathematical logic led to his landmark 1936 paper, “On Computable Numbers,” which ultimately spawned the field of computer science. After earning his Ph.D. from Princeton, he returned home to England and, during World War II, helped develop machines and algorithms to crack the Nazis’ purportedly unbreakable Enigma code.

Though Turing undeniably changed the world for the better, his scholarly work was not intended to respond to issues of the day. His inspiration was a profound question about the power of mathematical reasoning. From his creation of new mathematical knowledge came the development of computing innovations that made possible many of the societal advances and issues being discussed at Davos nearly 80 years after Turing arrived at the University.

Princetonians will continue to engage in events like Davos and others that enable our scholars to be present on the global stage. But we will also remain committed to the ideal, articulated by Wilson and embodied by Turing, that our greatest influence on the world comes from basic research and the search for fundamental truths.