A Professor’s Legacy, and Its Lessons for Today

Published in the March 4, 2020 issue of the Princeton Alumni Weekly. 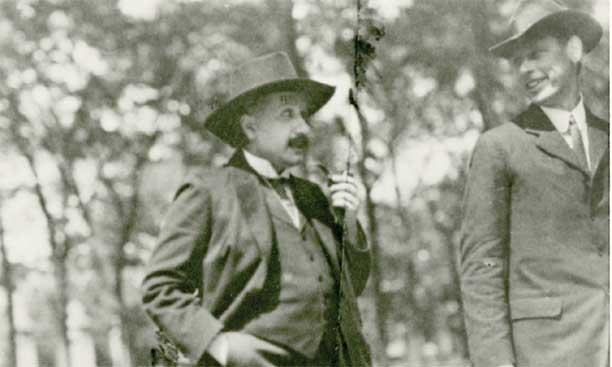 Albert Einstein and Oswald Veblen in Princeton in 1921. Einstein moved to Princeton in 1933.
Photo by Margot Einstein, from the Shelby White and Leon Levy Archives Center, Institute for Advanced Study, Princeton, NJ, USA

Few Princetonians know the name of Oswald Veblen, but he probably did as much as anyone to transform this University into a world-class research institution. In the late 1920s and early 1930s, Veblen carried out three extraordinary initiatives. He helped to create the original Fine Hall—what is today Jones Hall—as the first home for Princeton’s Department of Mathematics. He influenced Abraham Flexner’s decision to locate the Institute for Advanced Study in Princeton rather than Newark. And he became a founding member of the Emergency Committee in Aid of Displaced Foreign Scholars, which brought hundreds of refugees to Princeton and other universities.

Elyse Graham ’07 described Veblen’s accomplishments in a marvelous Princeton Alumni Weekly article published in May 2018. As she noted there, Fine Hall quickly became home to both Flexner’s Institute and the University’s mathematicians. The Jewish émigrés to Princeton included the likes of Albert Einstein, John von Neumann, and Eugene Wigner. Princeton was suddenly the best place in the world to study mathematics and theoretical physics.

When I composed my 2020 “State of the University” letter to the Princeton community, I organized it around Veblen’s achievements. His story not only illuminates Princeton’s past but also illustrates how today’s actions can shape the University for decades into the future.

Veblen’s humanitarian courage is especially inspiring. Graham points out in another PAW article that an eminent Harvard professor opposed Veblen’s efforts, arguing that if refugees were accommodated “the number of similar positions available for young American mathematicians is certain to be lessened, with the attendant probability that some of them will be forced to become ‘hewers of wood and drawers of water.’”

Veblen persisted, to the great benefit of this University and our country. At a time when anti-Semitism and nativism are on the rise, we need to remember the principles he exemplified. America’s strength and character depend on respecting the equality of persons, and the vitality of this University depends on our continued ability to attract, welcome, and support outstanding students and researchers from every part of the globe and every sector of society.

Veblen’s contributions to Fine Hall also hold important lessons for the University today. When Princeton began planning Fine Hall, no American university had yet constructed a math building. Most Princeton mathematicians had no office and worked from home.

Veblen recognized that an attractive working environment could encourage serendipitous scholarly exchange. He envisioned comfortable offices and elegant common rooms. The finished building included lockers and showers that professors could use after playing tennis on nearby courts. Undergraduates credited this feature to Dean Luther Eisenhart and mocked it in song:

At the dedication ceremony for Fine Hall, Veblen observed that Princeton and other research universities:

“are beginning to feel the necessity of providing centers about which people of like intellectual interests can group themselves for mutual encouragement and support, and where the young recruit and the old campaigner can have those informal and easy contacts that are so important to each of them.”

He concluded by opining that “it would greatly strengthen the University as a seat of learning if each natural intellectual group were so placed physically as to be automatically conscious of itself and of its relation to the University as a whole.”

Veblen’s observations help to explain why “bricks-andmortar” projects remain high priorities for the University even in an age when the possibilities for online research and virtual engagement are exploding. Part of the reason, of course, is that we require state-of-the-art laboratories to explore scientific frontiers, we need modern stages and exhibit halls to nurture artistic creativity, and so on.

But another, equally important part of the answer depends on the idea Veblen expressed at Fine Hall’s opening in 1930. Innovative scholarship benefits tremendously from “informal and easy contacts” among faculty and students with overlapping interests, such as the conversations that germinated in Fine Hall and propelled Princeton to the forefront of mathematical and physical research.

Our aspiration to enable such scholarship has informed the University’s campus planning and a series of projects now under design. Over the next several years, for example, we expect to construct a new art museum as well as new buildings for engineering and environmental studies. We will also renovate and expand Guyot Hall, rechristening it as Eric and Wendy Schmidt Hall, the new home for the Department of Computer Science.

All of these projects will seek to do what the old Fine Hall accomplished so spectacularly: catalyze scholarship and collaboration, thereby generating new ideas and training the leaders who will make a difference to the world tomorrow. As Oswald Veblen realized, university buildings are crucially important to academic life not for their own sake, but because of the talent they activate and the communities they create.