Published in the May 14, 2014, issue of the Princeton Alumni Weekly

One of my favorite duties as Princeton’s president is to serve as our cheerleader-in-chief. In addition to attending as many Tigers games and matches as possible, I have enjoyed opportunities this year to give pre-season and pre-game talks to some of our varsity teams and to “pump up the crowd” at our football team’s bonfire this fall. 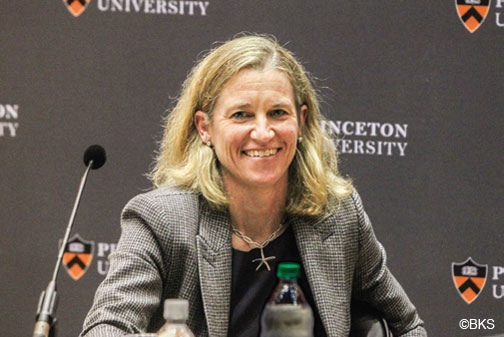 On April 15, I stood behind a microphone on Carril Court in Jadwin Gymnasium to rally the Tiger faithful once again. This time, the occasion was the introduction of Mollie Marcoux ’91 as the new Ford Family Director of Athletics — an announcement that most certainly pumped up the crowd of coaches, student-athletes, alumni, and staff members in the Jadwin bleachers that afternoon.

Mollie will play a critical role in the life of the University when she starts her new position in August, given the importance of varsity and recreational athletics to so many Princeton students and alumni, as well as our commitment to maintaining an athletics program based upon integrity and honor.

A legendary two-sport student-athlete at Princeton who has built her skills and reputation as an extraordinary leader in the amateur sports arena, Mollie rose to the top of a pool of superb candidates during our seven-month search for a new athletic director. She understands firsthand our values, having competed at the highest levels athletically (as an ice hockey and soccer star) and having excelled academically (as a cum laude graduate in history) during her four years on campus. And her highly motivated, focused, and creative leadership style has inspired and endeared her to the thousands of athletes, coaches, staff members, civic partners, and executives with whom she worked during her 19 years in senior roles with the Chelsea Piers organization in New York and Connecticut.

The position of athletic director is so multifaceted that some might consider it an impossible job. It requires someone who embodies the qualities of a dedicated educator, a motivational coach, an adept manager, and an enthusiastic community-builder. Mollie will be charged with overseeing Princeton’s 38 varsity teams as well as our club sports and recreational fitness programs; forging relationships with students, faculty, staff, alumni, peer institutions, and the local community; and upholding the University’s focus on athletics as an educational tool while also providing the support and vision needed for Princeton to build upon its legacy of excellence in intercollegiate competition.

These are duties that Mollie’s predecessor, Gary Walters ’67, has executed with tremendous success over the past 20 years. A few days prior to announcing Mollie’s appointment, I had the privilege of speaking at a tribute in Gary’s honor in Jadwin Gym and presenting him with a blazer inscribed on the inside with the slogan he created and championed: “Education Through Athletics.” I thanked Gary that night, and again when I introduced his successor, for his tireless commitment and his unparalleled accomplishments as Princeton’s athletic director. Under Gary’s leadership, Princeton’s athletics program has steadfastly focused on sports as a vehicle for learning while still producing a stunning collection of championship banners. Our athletics program stands in distinct contrast to the many others that have become more disconnected than ever from the educational missions of their institutions — a point of pride for Princeton, but a disheartening reality for the broader intercollegiate athletics landscape.

While Mollie will bring her own unique perspectives and experiences into her new role, she will passionately carry forward the mission that has long defined Princeton athletics. As a candidate, she impressed the search committee with her pure love of sports and her resolve to champion the lifelong lessons that all Princeton athletes — whether varsity, club, or rec — learn about competition, teamwork, and respect. They are lessons that Mollie’s coaches and teammates instilled when she was a Princeton undergraduate and that our Tiger coaches and athletes continue to emphasize today, which inspired her to return to campus.

As Mollie said in her introductory press conference, “Princeton’s coaches, across the board, are exceptional — not only for their personal accomplishments, but also for their integrity and commitment to the overall development of our student-athletes as competitors, as leaders, and as scholars. … Princeton understands that its coaches are teachers, that their teaching extends well beyond skills and strategies for their particular sports, and that its athletic programs should advance — not compete with — the educational mission of the University.”

In my own conversations with our current student athletes, and with our many devoted alumni who remain deeply engaged with our athletics program, I stress that the values undergirding Princeton athletics are an important part of what makes our University so special. And as we welcome a new era of Princeton athletics leadership under Mollie Marcoux, I know that she, along with our coaches and staff members across the department, agrees that these values will — and must — endure.