Published in the April 11, 2018 edition of the Princeton Alumni Weekly.

Five years ago, as I began my presidency, I created the Princeton Pre-read, a program that selects a book and sends it to freshmen before they arrive on campus. The Pre-read’s author speaks to the incoming class at the Freshman Assembly during Orientation week. The book also forms the basis of my Opening Exercises remarks, and I lead Pre-read seminars in the residential colleges during the fall semester.

Alumni and students alike often write to me to nominate books, or to ask why I chose a particular selection. I accordingly thought that it might be useful to describe some of the criteria that inform my decisions about each year’s Pre-read. 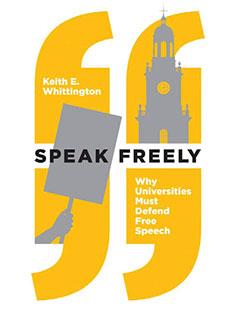 The Princeton Pre-read for the Class of 2022 is Speak Freely: Why Universities Must Defend Free Speech by Princeton’s Keith Whittington.

First, because one of my primary goals is to introduce students to Princeton’s vibrant intellectual culture, I limit my choices to scholarly books like those found on Princeton syllabi. The norms and practices of a great research university are vastly different from what most students have encountered in high school. I want the Preread to provide an early experience with the challenges and stimulation that come from close reading and engaged discussion.

An equally important goal for the Pre-read is to encourage students to reflect on the values that should guide their Princeton educations and their lives after graduation. For that reason, I look for a book that raises ethical questions relevant to our students’ lives. For example, Kwame Anthony Appiah’s The Honor Code provided a platform to discuss how to live honorably, and Susan Wolf ’s Meaning in Life and Why It Matters challenged students to examine their own purposes at Princeton and beyond.

As I pursue these objectives, I also keep in mind some pragmatic considerations. I prefer a book authored by someone willing and able to appear at the Freshman Assembly at the start of the year. Having the author on hand offers a preview of one of the special features of a Princeton education: students will have the chance to talk directly to world-class scholars who write books that define fields. It also enables us to model the kind of exchange that should take place in the classroom. Two Princeton faculty members join the author at the Freshman Assembly and comment on the book’s argument. Students see how professors simultaneously learn from and disagree with one another—a crucial example of what lies ahead.

Though not required, being a Princeton professor or alum is a modest plus—and five of the first six Pre-read authors fit that description. For example, in 2016, Danielle Allen ’93, now a professor at Harvard, returned to campus to discuss Our Declaration: A Reading of the Declaration of Independence in Defense of Equality. Danielle began by recalling what she felt in her own first week as a Princeton freshman—a story that enabled her to forge an immediate bond with the Class of 2020. If the Pre-read author is on our own faculty, students can continue the discussion during office hours or over lunch if they wish.

Because I lead Pre-read seminars, I try to keep the book close enough to my scholarly “strike zone” to credibly teach the material. I wandered furthest afield with Claude Steele’s Whistling Vivaldi, an investigation of stereotype threat that is grounded in social science rather than political theory. Fortunately, Provost and the Alexander Stewart 1886 Professor of Psychology and Public Affairs Deborah Prentice, who recommended the book, was nearby in Nassau Hall and could provide expert advice as I worked through Steele’s insights.

Finally, brevity and accessibility are virtues. For many students, the Pre-read will be the first scholarly book they have been asked to read in its entirety. What seems short to a graduating senior can seem lengthy to an incoming freshman. This fall, for example, one student surprised Professor of Politics Jan-Werner Müller by asking him why his book was so long—even though What Is Populism? was the shortest of all Pre-reads at 103 pages.

Next year’s Pre-read satisfies all of these criteria. Speak Freely: Why Universities Must Defend Free Speech by Keith Whittington, Princeton’s William Nelson Cromwell Professor of Politics, defends a robust conception of free speech grounded in the philosophy of John Stuart Mill. It provides a scholarly argument for free speech’s essential role in the truth-seeking mission of colleges and universities.

These days, free speech on college campuses is a hotbutton issue. Because this topic is directly relevant to everyone on Princeton’s campus, we will distribute the book more broadly than in prior years, providing copies to all undergraduate and graduate students, to the faculty, and to interested staff. We will also work with campus partners to sponsor discussions about what free speech should mean at Princeton and other colleges.

Over the next year, I look forward to participating in spirited dialogue, vigorous debate, and civil disagreements about Keith’s book, thereby exemplifying the practices that he champions and that are the lifeblood of this University. I expect those conversations will carry forward what, after five years, might now count as a Princeton tradition—using a shared scholarly text to inspire campus conversations about topics that matter deeply to our community.