In Planning Princeton’s Future, Lessons from an Older Sibling

Published in the September 16, 2015, issue of the Princeton Alumni Weekly

Moving into the new academic year, our planning efforts will intensify on a number of fronts as we explore a variety of ideas, proposals, and models to help shape Princeton’s development in the years to come. As part of this work, this summer I visited the University of Cambridge, an older sibling that may offer some lessons for our future.

Our strategic planning encompasses all facets of the University, including one particularly fast-growing area of interest among our students and faculty: entrepreneurship. Last spring, the Princeton Entrepreneurship Advisory Committee issued a report (available at www.princeton.edu/entrepreneurship) with a thoughtful set of recommendations for how to develop entrepreneurship in “the Princeton way.” In July, I went to Cambridge to learn more about the growth of its vaunted entrepreneurship ecosystem, which has been dubbed the “Cambridge Phenomenon” or “Silicon Fen”—a play on California’s “Silicon Valley” referring to the marshy terrain of eastern England. Not only did I gain insights into Cambridge’s success in facilitating entrepreneurship over the past few decades, I returned to Princeton with an expanded vision for how we might plan for the evolution of our campus.

When Americans think about universities that have catalyzed entrepreneurial activity around them, they typically focus on Stanford or the Massachusetts Institute of Technology—two institutions very different from Princeton. Stanford, with its many professional schools and thousands of master’s degree candidates, can feel not only entrepreneurial but corporate. MIT does not have the foundational commitment we have to the humanities. Both are superb institutions that execute their missions brilliantly, but Princeton could not emulate either of them without compromising values that define us.

Cambridge’s experience may be more illuminating for Princeton. Both Princeton and Cambridge have traditions of excellence that span the natural sciences, humanities, social sciences, and engineering—and we both have a distinctive emphasis on undergraduate education while offering world-class graduate programs.

Other similarities are more apparent when one arrives in Cambridge and encounters its glorious architecture. Like any proud Princetonian, I was immediately taken by the resemblance to our picturesque campus. This is, of course, no coincidence. Woodrow Wilson 1879’s besottedness with the courtyards and quadrangles of the Cambridge and Oxford campuses directly shaped the emphasis on Collegiate Gothic architecture in Princeton’s campus planning in the early 20th century.

Like Princeton, Cambridge has a historic core campus that is separated by a small body of water from peripheral fields, some of which are roughly as far away from their core campus as our West Windsor fields are from Nassau Hall. Cambridge began developing its West Campus, known as the West Cambridge site, in the 1960s. In 1974, the university moved its famed Cavendish Laboratory from its core campus to West Cambridge. Over the years, this site has provided Cambridge with flexibility in accommodating corporate-academic research partnerships and faculty entrepreneurial activity, which in turn have helped to support local and regional economic development. Cambridge has a long-established tradition of faculty, staff, and students using bicycles and mass transit to traverse the campus rather than relying on automobiles, a practice we would do well to emulate.

Cambridge’s campus development illustrates the range and importance of long-term planning, and it provides interesting examples and raises helpful questions for consideration in our own planning. Currently we are working to develop a new plan to guide the evolution of Princeton’s campus from 2016 through 2026—and beyond. This plan will encompass most of the lands owned by the University and will examine all elements of a great campus, including spaces for teaching, learning, research, community-building, housing, social life, athletics, arts, technology, health, and other functions. 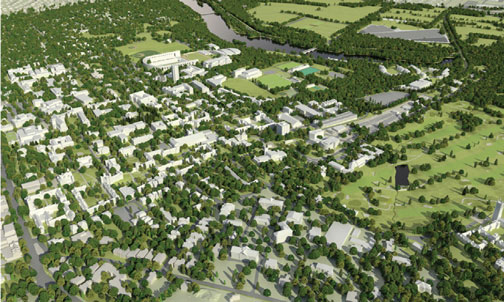 The new campus plan will consider a 10-year horizon to guide near-term growth and change, as well as a 30-year horizon to establish a broader strategy for long-term campus development. We will develop our campus plan to support the goals and priorities established by our University-wide strategic planning process and in doing so will explore critical questions related to land use, campus design, landscape, infrastructure, sustainability, and transportation.

Our plan will have to be sensitive to Princeton’s unique identity, but, as we seek inspiration, our kinship with Cambridge may make it an especially fruitful point of comparison. Like Princeton, Cambridge has a commitment to liberal education and, in particular, the humanities, that shines through in its classic, tranquil beauty, even as it has emerged as a hub of entrepreneurial progress. In our planning, we must prepare to respond to the evolving needs of our students and scholars and to support a robust environment of inquiry and discovery while retaining our special character. We must ensure that we enhance the qualities that make this one of the world’s most magnificent college campuses—stunning architecture in a bucolic setting that makes the heart soar, developed carefully to meet the needs of new generations even as we preserve the sense of communal liberal learning that all Princetonians hold dear.

Corrected version, November 2015. The originally published version misstated
the year when the Cavendish Laboratory moved. The correct date is 1974.