Liberty and Privacy in the Digital Age: Princeton's Contributions to Cybersecurity

Published in the April 12, 2017 edition of the Princeton Alumni Weekly

"What is Princeton’s boldest bet for the future?”

I’m often asked this question when I talk about our strategic framework, approved by the Trustees in January 2016 to guide the University in the years ahead. Perhaps expecting to hear of a new academic department or a grand online program, my questioners are occasionally surprised when I tell them that our “boldest bet” is to reaffirm emphatically the mission that has long defined Princeton as an outstanding liberal arts research university. We trust in the value of a long-term perspective at a time when many institutions are focused on short-term gains. We believe that curiositydriven research and innovative teaching in the humanities, sciences, social sciences, and engineering are at the heart of the contributions the University can make.

At the same time, outstanding liberal arts universities today must also engage effectively with a rapidly changing world. Our students, whatever their chosen fields of study, should graduate with technological knowhow and with the capacity to raise important ethical questions about the nature of technology and the uses to which it is put.

The most recent Princeton-Fung Global Forum, convened by Woodrow Wilson School Dean Cecilia Rouse with the assistance of Associate Dean Elisabeth Donahue, showcased some of the ways that Princeton professors are meeting this challenge. Members of our faculty in computer science, engineering, public policy, and sociology joined with colleagues in industry and academia in Berlin, Germany, last month to address the topic, “Society 3.0+: Can Liberty Survive the Digital Age?” The forum served as a valuable opportunity to highlight diverse initiatives at Princeton on the critical and timely issue of cybersecurity.

Much of Princeton’s work in this area ﬂows out of the Center for Information Technology Policy, an interdisciplinary center jointly sponsored by the Woodrow Wilson School and the School of Engineering and Applied Science. Calling itself “a nexus of expertise in technology, engineering, public policy, and the social sciences,” CITP supports research, teaching, and public events that address the interaction of digital technologies with society.

CITP director Ed Felten, the Robert E. Kahn Professor of Computer Science and Public Affairs, recently completed a term as the Deputy U.S. Chief Technology Ofﬁcer in the White House. He is bringing this experience directly to the classroom in a course he is teaching this term on “Artiﬁcial Intelligence and Public Policy” (COS/WWS 352). Together with Andrew Appel ’81, the Eugene Higgins Professor of Computer Science, and a number of their graduate students, Felten has been involved for over a decade in collecting electronic voting machines and hacking them to demonstrate their vulnerability to cyberattacks. 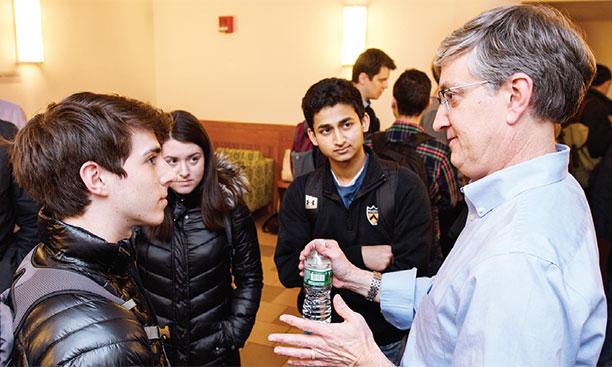 Other Princeton faculty address cybersecurity questions that emerge from the Internet, and more recently, the “Internet of Things,” the network of “smart” devices like programmable thermostats, ﬁtness trackers, and even buildings, that collect and exchange data. Nick Feamster, a computer science professor and former acting CITP director, was the lead editor on a report recently issued by the Broadband Internet Technology Advisory Group, a coalition of academic and industry leaders. The report offered guidance both to device makers and to Internet service providers on how to improve security and privacy in the Internet of Things. Feamster is also involved in research to use patterns of domain registration to identify malicious websites before they can do much harm.

Jennifer Rexford ’91, the Gordon Y.S. Wu Professor of Engineering, is especially interested in how infrastructure shapes—and at times limits—people’s experience of the Internet. For the increasing numbers of users who have Internet access only through mobile devices, the ability of a few corporations to control the device, operating system, popular applications, and broadband markets means that these corporations also inﬂuence what information is disseminated and what innovations succeed. Rexford is applying her expertise in computer networking to help policymakers consider how federal regulation can keep up with this changing proﬁle of Internet access.

Faculty members Prateek Mittal, in electrical engineering, and Matt Salganik, in sociology, are both concerned with threats to privacy in an era of Big Data, particularly data gleaned from people’s web browsing habits or social media accounts. Salganik’s forthcoming book, Bit by Bit: Social Research in the Digital Age, describes a number of cases in which Big Data research projects either failed to gain participants’ consent or failed to properly anonymize their data. His book is intended in part as an ethical guide for researchers embarking on work in this growing area. Mittal’s research focuses on developing systems that can effectively anonymize individual Internet use in order to mitigate the effect of mass surveillance. He is also designing technologies to support data-driven applications that can protect the privacy of the data they collect.

The Princeton-Fung Global Forum brought all of these Princeton faculty members and several more of their colleagues into conversation with counterparts from government, industry, nonproﬁts, and the academy. The resulting dialogues exempliﬁed beautifully the power of Princeton’s long-term, interdisciplinary perspective to illuminate and address the problems that confront our world today.