From the March 1, 2017 edition of the Princeton Alumni Weekly.

As this edition of the PAW was going to press, we received news of President Trump’s executive order banning travel to the U.S. by citizens of seven Muslim-majority countries. The full global impact of this order is not yet clear, but it has caused disruption to the lives of thousands of individuals and families, including Princeton students, faculty, and alumni. I joined with 47 other college and university presidents in a letter urging the President to rectify or rescind this ban. In the meantime, I have chosen to publish this piece as originally written. It is both a celebration of the vibrant Muslim community on our campus and a statement of solidarity with all of those around the world who seek religious and political freedom. — C.L.E.

Early in January, I had the pleasure of attending a reception after our Muslim community’s Friday prayers. The day was cold and snowy, but the atmosphere inside Murray Dodge was warm and convivial as Princeton students, staff, and friends gathered together. 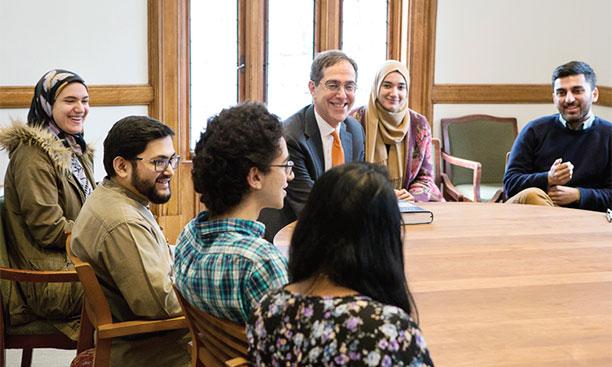 I had come to talk with Imam Sohaib Sultan and a group of undergrads, grad students, and recent alumni about their experiences at Princeton. Our lively discussion made clear to me that Princeton’s Muslim students feel at home here, relishing the freedom they have to participate fully in the life of the University and to practice their faith. Being a Muslim and a Princetonian is possible today in a way that it would not have been 50—or even 15—years ago. In recent decades, the University has taken significant steps to foster an environment of acceptance and support for the many religious traditions represented on our campus.

Some are remarkably simple accommodations that can make it much easier for students to be observant. For Muslim students, the installation of a footbath in Murray Dodge for ritual washing before prayer services and the availability of halal meat in dining halls are examples of accommodations that have had a significant impact. The introduction of four-year residential colleges nearly a decade ago and the development of other dining options has benefited some Muslim students along with others who prefer alcohol-free alternatives to Prospect Street for social life in their junior and senior years.

The University has also taken formal steps to support its religiously diverse student body by establishing chaplaincies for several growing communities. In 2008, Vineet Chander was hired as Princeton’s first Hindu chaplain, and Sohaib Sultan became its first full-time Muslim chaplain. Such positions are still rare on American college campuses today — indeed, Chander’s was the first institutionally supported Hindu chaplaincy in the United States. Sultan, who grew up in Indiana and was a college student on 9/11, brought experience as a journalist, author, and student advocate, in addition to his seminary training, to his role at Princeton. That broad experience has served him well over the past nine years in his work both to support the Muslim community on campus and to educate non-Muslims at Princeton and in the wider community about Islam.

With support from Dean of Religious Life and the Chapel Alison Boden and the Office of Religious Life, Imam Sultan has created programs like “Islam in Conversation,” which invites noted Muslim scholars, artists, and leaders to campus to engage with students and faculty on issues of faith and ethics in contemporary society. In a September 2016 event jointly sponsored with the James Madison Society, for example, Professor Robert George joined Shaykh Hamza Yusuf, a wellknown Islamic scholar, for a conversation about faith, public morality, and current affairs.

Muslim student groups are active on campus as well. The largest of these organizations, the Muslim Students Association, focuses on sustaining religious life and practice for its members while also educating the campus community; Princeton Muslim Advocates for Social Justice and Individual Dignity (MASJID) offers an outlet for students interested in contemporary justice issues.

I am pleased that Imam Sultan and Rabbi Julie Roth, the University’s Jewish chaplain, have developed a warm and collegial relationship that has helped them to build bridges between their faith communities. Princeton’s Muslim and Jewish groups have collaborated on campus dialogues. They have also made joint visits to Spain, where students studied interactions between Muslims and Jews that took place before 1492, and Detroit, where they did service projects and learned about the local Muslim and Jewish communities.

The vibrant, pluralistic Muslim community at Princeton today is a sign of how far the University has come from the days, many decades ago, when it was known for religious quotas and other exclusionary practices. Yet the existence of this community is also a fitting reminder of the ecumenism embedded in the University’s very foundation. Princeton’s Charter of 1746 is pointed in its admonition that Trustees not exclude “any Person of any religious Denomination whatsoever from … any of the Liberties, Privileges, or immunities of the … College.”

Princetonians can take pride in that radical language, and in the role that our alumnus James Madison later played in drafting the Constitution’s religion clauses. I have spent much of my scholarly career writing about religious freedom, and have frequently been impressed by the intense attachment to that ideal shared by Americans of widely varying faiths and political views. My meeting with Princeton’s wonderful Muslim community increased my appreciation for the religious diversity that we have achieved. It also reinforced my conviction that in these turbulent times all of us must be vigorous advocates of the principles of religious freedom and non-discrimination embedded in this nation’s history and laws. That is a role I happily embrace.