Excellence That Makes a Difference

Published in the September 14, 2016 edition of the Princeton Alumni Weekly

As the University’s mission statement recognizes, Princeton’s contributions to the world depend first and foremost on “scholarship, research, and teaching of unsurpassed quality.” The last academic year provided bountiful evidence of the quality that is so vital to what we do. As we prepare to begin a new year, I thought that it might be a good time to provide you with a recap—and, to be honest, I am happy to have a chance to brag a bit about a few of the many faculty and students who make this place so special.

The year’s grandest celebration of academic excellence occurred in October, when Angus Deaton was awarded the Nobel Prize in Economics. At Princeton, the events surrounding a Nobel Prize feel almost like the scholarly equivalent of a Super Bowl victory parade. They provide an occasion to toast not only the prize-winner but the University’s commitment to first-rate research and teaching. As he moved from one laudatory reception to the next, Professor Deaton quoted his Princeton colleague and fellow laureate, Daniel Kahneman, who said, “One of the best things about winning the Nobel prize is how happy it makes other people.” 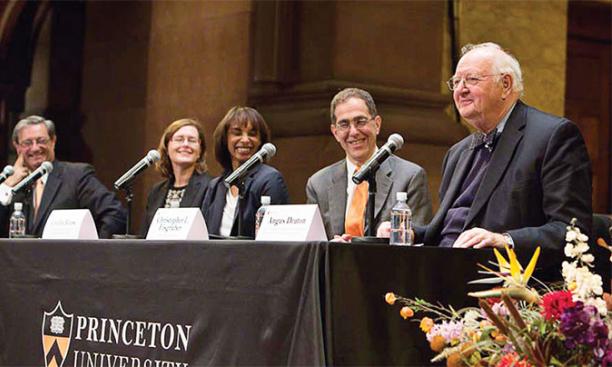 Though Professor Deaton’s Nobel Prize was the most widely reported faculty distinction last year, several other faculty members were also recognized with exceptional awards and honors. In September, Professor Jhumpa Lahiri, a new appointee in Creative Writing, was honored with the National Humanities Medal, and another new faculty member, Professor Marina Rustow (Near Eastern Studies) received a MacArthur Fellowship (often referred to as a “genius” grant). This past spring, Professor Simon Levin won the National Medal of Science.

And that is only the tip of the iceberg. Six faculty members were inducted into three of the national academies—Sciences, Engineering, and Inventors—while another 10 joined the American Academy of Arts and Sciences. They join more than 125 colleagues on the current faculty who represent Princeton in these august institutions.

The 2015-16 academic year was also a banner year for our undergraduate students and alumni, who won an impressive collection of fellowships. Princetonians took home five Rhodes Scholarships, three Marshall scholarships, a Mitchell fellowship for study in Ireland, and five of the inaugural Schwarzman Scholarships for study in China. Two Princeton juniors received Truman Scholarships that recognized both their academic achievement and their commitment to service.

The recipients’ biographies provide a window into the character of a Princeton education, at once evolving and traditional. For example, they showcase the growing importance of international opportunities to Princeton’s undergraduate programs. The majority of the fellowship recipients had significant international experiences, including seven who participated in the Bridge Year Program, and more than half who studied abroad, participated in a Global Seminar, or interned overseas with the International Internship Program.

The core elements of a Princeton liberal arts education figured equally vibrantly in the students’ achievements. Indeed, last year’s awards showcased the Medieval Studies Certificate Program, which produced one Rhodes Scholar and one Marshall Scholar. At a time when many spurn the humanities in favor of more self-evidently “pragmatic” courses of study, Princeton continues to recognize them as an important path to leadership—and so too, apparently, do the selection committees for the world’s most prestigious fellowships.

Princeton’s graduate students also achieved a remarkable array of distinctions in 2015-16. A record nine received Fulbright research fellowships for the coming academic year, and another 31 were awarded National Science Foundation graduate research fellowships. Three graduate students—two in Classics and one in Art and Archaeology—won the Rome Prize for a year’s study and research at the American Academy in Rome, and four were awarded Mellon/ACLS Doctoral Completion fellowships.

All of these awards and prizes provide some rough evidence that Princeton is achieving the excellence for which it strives. But that evidence is only rough; what matters ultimately is the quality of what our students, faculty, and alumni do, not the decorations they receive.

The best work happening on campus today may win prizes many years from now. Indeed, when Provost David Lee, Dean of the Faculty Deborah Prentice, and I review the quality of the faculty, we pay special attention to our recently tenured professors, spectacular talents who have proven their mettle but whose best work is still to come. We note the accomplishments of faculty members like Lital Levy, of Comparative Literature, who won the Modern Language Association’s Prize for a First Book for her work on Arabic and Hebrew literature in Israel/ Palestine. Or Mark Braverman of Computer Science, who won the 2016 Presburger Award from the European Association for Theoretical Computer Science for his promising work in complexity theory.

Celebrating such accomplishments is one of the happiest parts of any university president’s job. They are special reminders of the benefits that flow when university communities support the creativity of talented people, and the power of ideas to improve the world—a theme that, appropriately enough, figures prominently in Angus Deaton’s Nobel Prize-winning work.