Published in the December 7, 2016 edition of the Princeton Alumni Weekly.

On October 22, 2016, we unveiled a new medallion embedded in the walkway in front of Nassau Hall. I was joined at the podium by Bob Durkee ’69, Vice President and Secretary of the University, and Brent Henry ’69, Vice Chair of the Board of Trustees and Chair of its Wilson Legacy Review Committee. In attendance were alumni and parents participating in the Alumni Volunteer Weekend. Several people suggested that my remarks might be of more general interest, and I reprint them below. —C.L.E.

We come together this morning to recast the University’s informal motto, adding words spoken by Justice Sonia Sotomayor, Class of 1976, to those uttered by President Woodrow Wilson, Class of 1879. By so doing, we participate once again in the vibrant evolution of the traditions that shape this University’s identity. 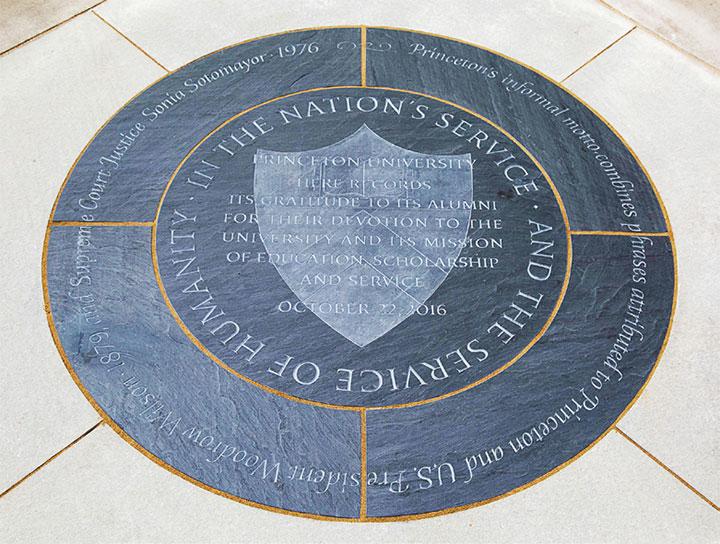 The evolution of those traditions brings to mind the words of another Princetonian who preceded Justice Sotomayor on the Supreme Court and who, like her, served this nation with distinction. In one of the most widely quoted and influential dissenting opinions ever written, Justice John Marshall Harlan, Class of 1920, said that the American Constitution’s guarantee of liberty took its meaning from “the traditions from which [our country] developed as well as the traditions from which it broke.” “That tradition,” he added, “is a living thing.” [1]

The traditions of this University, like those of our country and our Constitution, are living things. We do them no justice if we regard them as relics deserving of uncritical adulation, mindless obeisance, or ossified preservation. We give those traditions their due—we honor them most faithfully—only if we cultivate them actively in light of the values and purposes at the heart of this great liberal arts University.

This loving stewardship, this interpretation and reinterpretation of our shared heritage, dates back to the origins of our school. We have persisted and we have changed. We began as a tiny liberal arts college founded to educate young men for the Presbyterian ministry. In Wilson’s era we became a research university. In Sotomayor’s time, we opened our gates to a wider world, becoming at once more diverse, more international, and more intellectually eminent than ever before.

The University’s evolution continues to this day and will continue beyond it. Princeton is the better for the changes that have happened, and those changes have made Princeton more true to the very best values that have defined us since our inception.

Woodrow Wilson’s memorable phrase, “Princeton in the Nation’s Service,” spoken at the University’s 150th anniversary in 1896, captured one of those values. It expressed this University’s long-standing commitment to service and leadership. Wilson’s words inspired generations of Princeton students and alumni. His reference to the nation was, however, incomplete and exclusive. In 1996, my predecessor, Princeton’s marvelous eighteenth president, Harold Shapiro *64, addressed that exclusivity by reinterpreting Wilson’s idea and Princeton’s tradition to embrace service not only to this nation but to all nations.

Today, we again revise the motto, this time to correct forms of partiality inherent in the very concept of nationhood. As Justice Sotomayor pointed out in her speech accepting the Woodrow Wilson Award in 2014, the concept is partial because it values service to the state over service to people or individuals. Coincidentally or not, it is also partial in a way that hints at the racism that marred Wilson’s towering achievements at this University and on the world stage.

The word “nation” comes from the Latin word for “birth,” and its English-language meaning suggests a people defined by ties of blood, ethnicity, or culture. By adding Sonia Sotomayor’s words to Wilson’s, we recognize our responsibility to serve not only our state or our tribe but all members of the human community.

Today’s modest ceremony may soon be forgotten. But for so long as this medallion remains here, in this meaningful and beloved place, it will remind students, faculty, staff, alumni, and visitors to our campus of this University’s values. It will remind them of those who helped to build the institution we cherish, and it will remind them, too, of our collective responsibility simultaneously to respect the past, to acknowledge forthrightly its deficiencies, and to improve upon it.

The medallion will remind us, in short, of the traditions from which today’s Princeton developed and the traditions from which we have broken. Our traditions are, as our fellow alumnus John Marshall Harlan said, a living thing. I am grateful to all of you for your partnership not only here today, but also in the many shared endeavors through which we steward and cultivate what we inherit from those who preceded us for the benefit of those who will follow us.

Thank you for being here, and thank you for your support of this very special University.