Celebrating the Latino Community at Princeton

Published in the April 26, 2017 edition of the Princeton Alumni Weekly

Earlier this month I had the pleasure of participating in ¡Adelante Tigres!, an alumni conference celebrating Princeton’s Latino community. More than 750 alumni and guests returned to campus for thought-provoking lectures, enlightening conversations, and, of course, great food and lively dancing. Justice Sonia Sotomayor ’76 delighted everyone by spending almost two full days at the conference, speaking to a packed house at Richardson Auditorium and warmly greeting old friends and new acquaintances alike.

¡Adelante Tigres! means “forward, tigers,” and it aptly captures the spirit I saw during those three days. There were opportunities to reflect on the past and to celebrate both individual accomplishments and the collective efforts of the Latino community to gain recognition and representation on campus. There were also opportunities to celebrate the Latino (or “Latinx,” the gender-neutral term that some students prefer) community at Princeton today, and to envision its continued impact on the University in the years ahead.

For me, one of the most extraordinary sessions was a panel that featured Harold Fernandez ’89, Yessica Martinez ’15, Dan-el Padilla Peralta ’06, and Maribel Hernández Rivera *10. All four were undocumented for a period in their lives, three of them while students at Princeton. All four excelled at the University, becoming leaders on campus and in the world beyond.

Fernandez, for example, is now a prominent heart surgeon on Long Island. In his remarks, he recalled the harrowing boat trip that brought him to the United States, and the support from Princeton President William G. Bowen *58 that helped him and his family fight deportation. 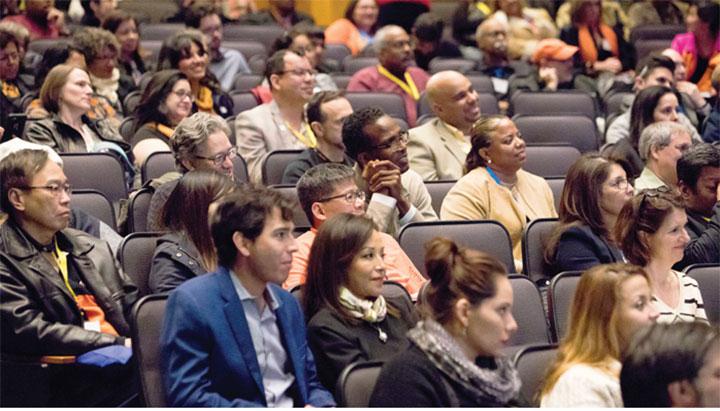 The panelists emphasized that pride in their own achievements was tempered by the knowledge that others were denied the opportunity to succeed, instead suffering deportation or struggling in the shadows of the law. Padilla Peralta, now an assistant professor in Princeton’s Department of Classics, riffed on a passage from Exodus, urging us to see mobility and migration as sources of pride and value, rather than as grounds for marginalization.

The stories told by these four alumni provided an intensely personal, humane, and thoughtful perspective on issues vital to our world and our campus: migration, inclusion, socioeconomic mobility, and the meaning of American ideals. I was reminded again of how important it is for Princeton to draw talent from every sector of society in order to ensure the quality of its teaching and research and to expand the perspectives represented on our campus.

For the Latino community, making a home at Princeton took some time. Although we know that a small number of Hispanic students attended Princeton in the late 19th century, growth came very slowly until the 1970’s, when the community began to coalesce around a common Latino identity and shared goals.

In 1974, the young Sonia Sotomayor published an opinion piece in The Daily Princetonian titled, “Anti-Latino discrimination at Princeton.” She called attention to low student numbers (less than 60 on campus), the absence of any Latino administrators or faculty members, and the lack of any courses dealing with Latino culture. Her piece concluded with a challenge: “[I]t is only when Princeton fulfills the goal of being a truly representative community that it can attempt to instill in society a respect for all people—regardless of race, color, sex, or national origin.”

Today, Latinos make up almost 10 percent of the undergraduate student body, up from 6 percent in 2000. We have 44 Hispanic faculty members, both tenure-track and non-tenure track, up from 29 in 2001. The University’s administrative team includes leaders such as Ramona Romero, Princeton’s outstanding general counsel, who came to Princeton in 2014 after serving in private practice and government. In addition to individual volunteer participation, Latino alumni as a group support each other and the University through the Association of Latino Princeton Alumni (ALPA). ALPA President Ricardo DeLeon ’86 co-chaired the conference, along with three members of Princeton’s Board of Trustees: Margarita Rosa ’74, José B. Álvarez ’85, and Yvonne Gonzalez Rogers ’87.

¡Adelante Tigres! showcased the tremendous accomplishments and truly global impact of Princeton’s Latino alumni in the arts, business, journalism, academia, and public service. Among notable Latino alumni in elected office were Eduardo Bhatia ’86, former president and current minority leader of the Senate of Puerto Rico, and Nellie Gorbea ’88, the Secretary of State of Rhode Island, both of whom gave impassioned addresses. The conference also featured four Pyne Prize winners: joining this year’s winner, Marisa Salazar ’17, were Martinez ’15, Fernandez ’89, and Sotomayor, who in 1976 was the first Latino student ever to be awarded Princeton’s highest undergraduate honor. The stories told by these Princetonians and so many others at the conference expressed the animating spirit of ¡Adelante Tigres!—forward, tigers, in service to the nation and humanity.