Published in the April 2, 2014, issue of the Princeton Alumni Weekly

Alumni Day 2014 took place on a warm and sunny February day, resplendent with orange, a welcome break from an arduous winter. It was a day to celebrate the best of Princeton. Hunter Rawlings *70 accepted the Madison Medal with a speech — excerpted in this issue — that compared insights from neuroscience and Emily Dickinson. Sonia Sotomayor ’76 received the Wilson Award and emphasized that an ethic of service depends on humble acts of human kindness. The undergraduate Pyne Prize winners inspired us with their contributions to international service and the arts, and the graduate Jacobus Fellows dazzled us with their achievements in neuroscience, Eurasian history, materials science, and English literature.

The University’s newest programs were vividly on display. Pyne Prize winner Izzy Kasdin is a campus leader in the arts, taking full advantage of the initiatives launched by President Shirley Tilghman. Izzy’s fellow Pyne Prize recipient, Joe Barrett, was among the first cohort of Bridge Year students, tutoring impoverished children in Varanasi, India, before beginning his studies. One of the Jacobus Fellows, Cristina Domnisoru, will receive her doctorate in a discipline — neuroscience — in which the University conferred its first Ph.D. earlier this year. 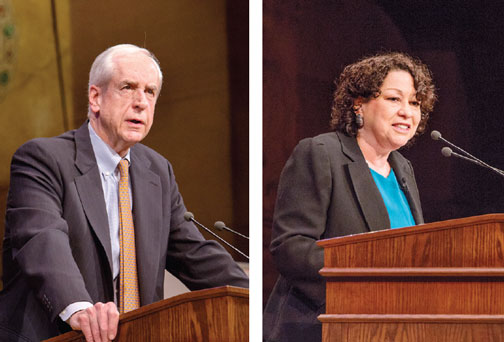 As is true so often at Princeton, new mixed with old. The University’s grand traditions shone brightly throughout the day. Indeed, as I listened to Rawlings and Sotomayor, I was struck by how each of them echoed Princeton’s greatest speech, Woodrow Wilson’s “Princeton in the Nation’s Service,” delivered at the University’s sesquicentennial celebration in 1896. In Sotomayor’s case, the connection was obvious — the title for her own speech was the University’s informal motto, “In the Nation’s Service and in the Service of All Nations,” which is, of course, drawn from Wilson’s address.

Though Rawlings neither mentioned Wilson nor uttered “in the nation’s service,” he, too, echoed Wilson. Rawlings focused on the need to protect the liberal arts in an era obsessed with short-term, practical training. So did Wilson. He praised science for “the gain and the enlightenment that have come to the world through [its] extraordinary advances.” But he also warned that technological change had made society “credulous of quick improvement, hopeful of discovering panaceas, confident of discovering success in every new thing.” Stressing the importance of history, literature, and the classics to leadership in a modern society, Wilson declared, “He is not a true man who knows only the present fashion.”

Wilson expected the University to supply that kind of leadership, and to do so, “the air of affairs had to be admitted to all its classrooms.” He meant not “the air of party politics” but “the sense of the duty of man towards man, of the presence of men in every problem, of the significance of truth for guidance as well as for knowledge, of the potency of ideas, of the promise and the hope that shine in the face of all knowledge.” (Wilson’s language, like the Princeton of his time, was gendered, but his references to “men” apply equally well to women.)

Wilson regarded Princeton’s scholarly mission as the heart of its service to the nation. By enabling students and faculty to pursue truths that matter — truths significant “for guidance as well as for knowledge”— Princeton generates ideas that move society and inform public affairs, and it prepares its graduates for leadership in their communities and professions.

This lofty vision of the University might at first seem different from, or even at odds with, the notion of humble service put forward by Sotomayor in her Wilson Award speech. She celebrated modest but meaningful acts — such as caring for a sick friend — that improve the lives of others.

Yet, Wilson’s vision and Sotomayor’s share a common core. Wilson said that to bring the “air of affairs” into the University’s classroom, students and faculty must maintain a “sense of the duty of man towards man.” Like Sotomayor, Wilson insisted that Princetonians must remain actively conscious of their broader responsibilities to humanity.

This year’s Pyne Prize winners exemplified the mixture of service and learning that Wilson evoked so vividly. Izzy Kasdin directed theatrical productions and organized an AIDS benefit while producing original, prize-winning scholarship on America’s cultural heritage. Joe Barrett studied history, aided the poor in India, and participated in prisoner assistance programs in New Jersey to prepare for a career in which he hopes to address issues of poverty and social inequality.

Wilson urged Princetonians to create a university that was at once a place where scholars pursued scientific truth and honored literary beauty, and where the “school [was] of the nation.” I venture to hope that, had Wilson been with us in February to hear Hunter Rawlings, Sonia Sotomayor, and the student prize-winners, and to see how many of his fellow alumni returned to celebrate their University, he would have allowed himself a quiet smile of satisfaction — and, perhaps, despite his formal reserve, joined in a locomotive for Old Nassau.